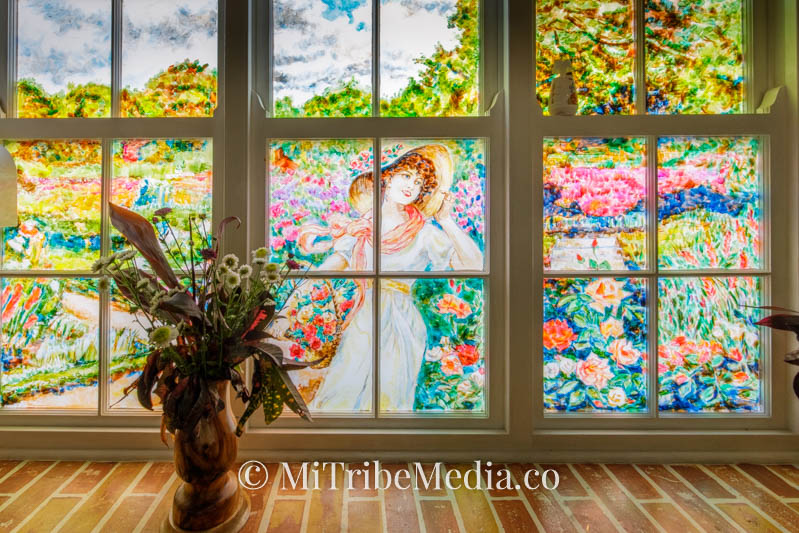 A striking new public art installation, known as the Cistern Chapel, in the historic Queensland city of Maryborough transforms a dark and depressing toilet block into a much-loved masterpiece. Travel writer Fiona Harper visited what is fast becoming Australia’s most popular public toilet to see what all the fuss is about. What she found was an extraordinary public toilet (which still functions very much as it is intended to do) with the walls and ceilings adorned with art. Chandeliers hang from the ceiling, fresh flowers are replenished regularly in their timber hand-crafted vases and piped music plays throughout. Think classical chamber music and Handel’s water music while a soothing nature-themed soundtrack compliments the parents room.

Just three hours from Brisbane while exploring the Fraser Coast, a trip to the historical town of Maryborough is a must. Maryborough’s striking art, statues … 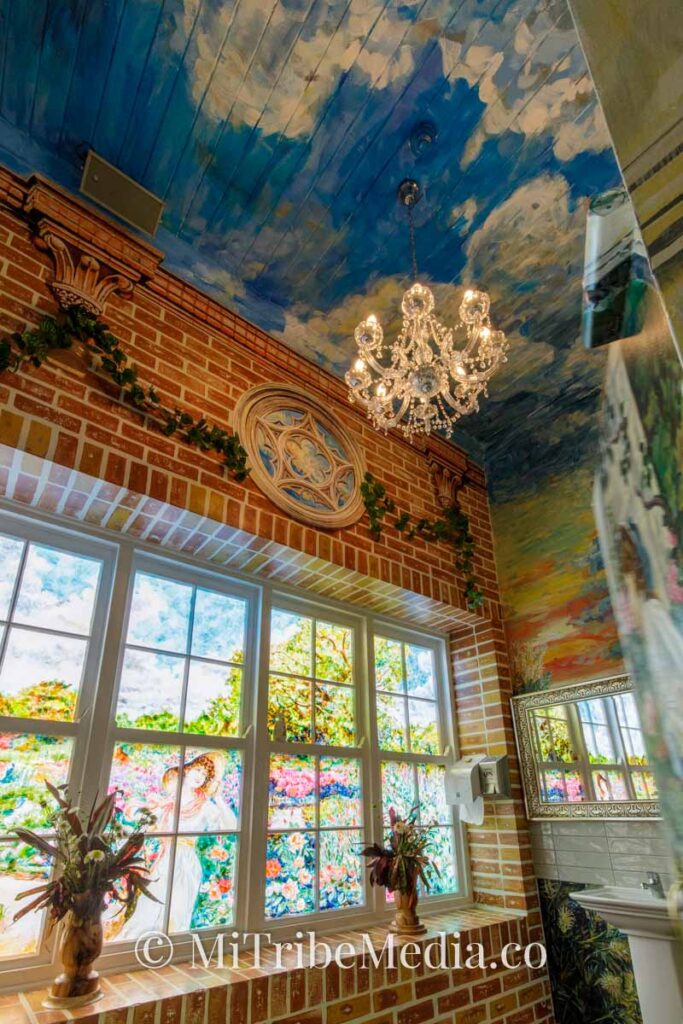 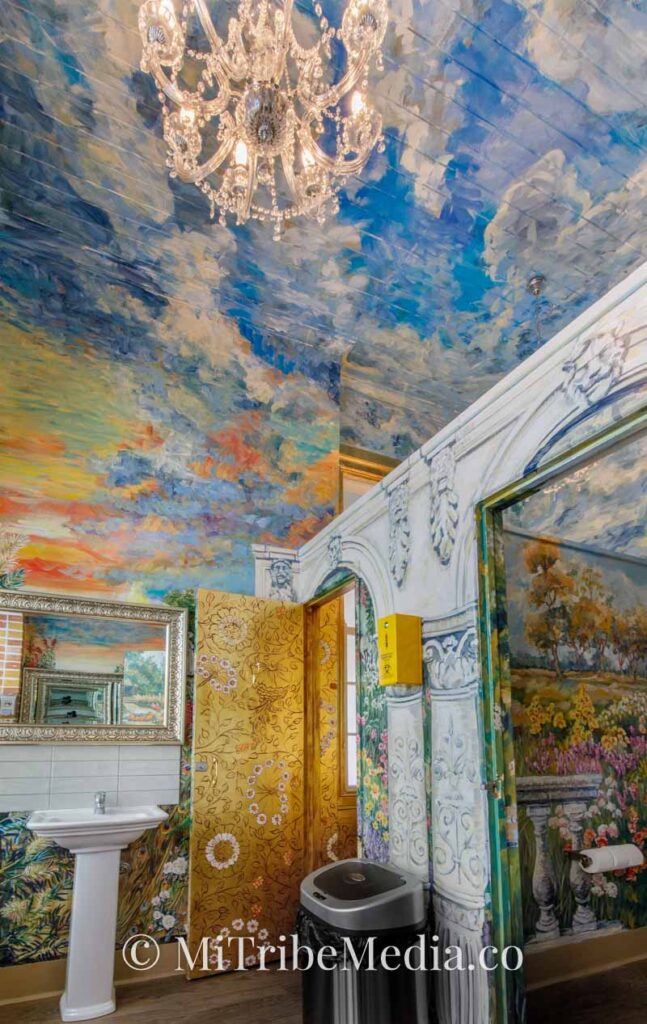 ‘This is so beautiful I’ve got tears in my eyes,’ sobs a choked-up visitor exiting the Cistern Chapel.

‘I heard about this on Facebook so I rang my friend and said ‘do you want to come to the toilet with me?’’ she laughs with a grin that lights up her face. Vigorous tail-wagging of her blonde labradoodle confirms her euphoria is infectious.

The toilet in question is a public loo in the Town Green, adjacent to City Hall in the historic Queensland city of Maryborough.

A woman twirls around the Parents Room accompanied by a soundtrack of cheerfully twittering birds, declaring joyously, ‘I’ve got a happy heart!’

In a cheeky nod to Michaelangelo’s brushstrokes on the Sistine Chapel which honour consecrated spaces, Maryborough has taken the humble public toilet and given it damn good shake-up.

The Cistern Chapel with its stunning artwork adorning walls and ceilings is spreading pure joy with plenty of cheeky, quirky humour to make people smile. Actually, on the day I visit there’s a downright festive air around the loos with divine views. The toilets are a functioning public facility, but with so much interest, most visitors are more interested in snapping photos than relieving themselves. Women and men are happily checking out each other’s facilities, usually off limits to gender-specific use, though the regular rules seem to have been temporarily tossed out the window to enable everyone to see the artworks. 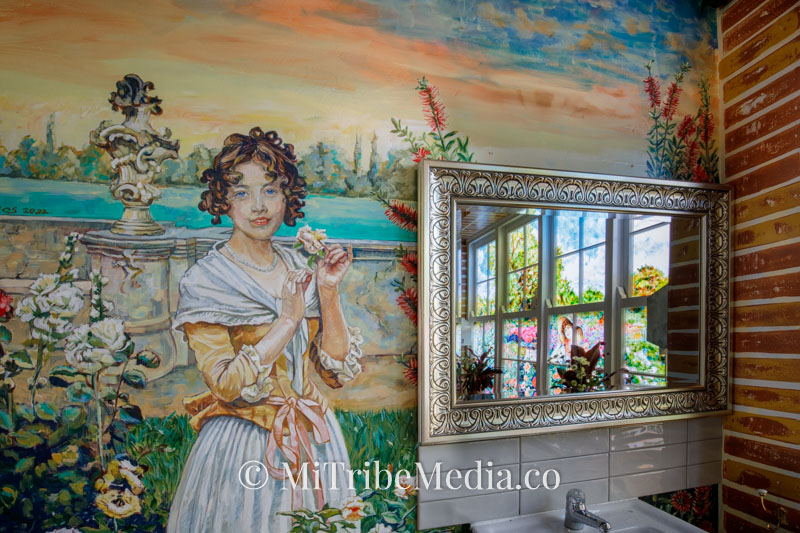 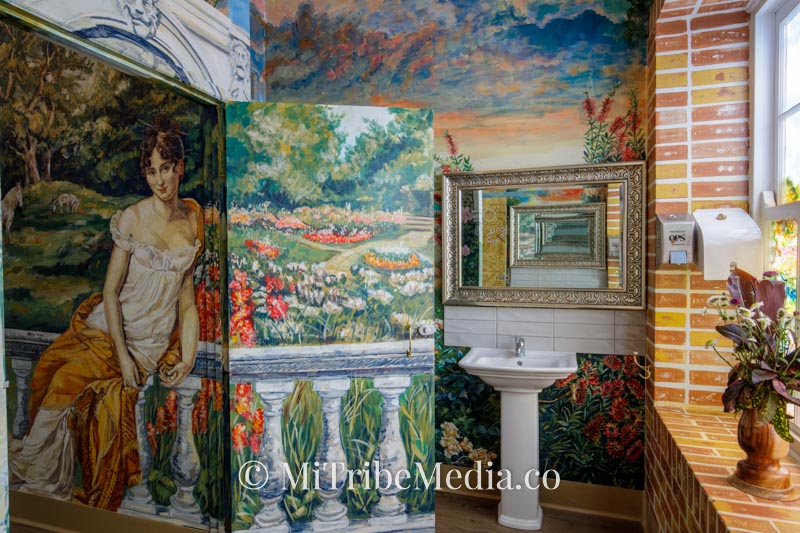 ‘This reminds me of the day I got married when I couldn’t stop smiling,’ says one delighted woman emerging from the men’s urinal with an ear-to-ear smile.

‘I woke up feeling like C-R-A-P this morning,’ spells out another, ‘and now I feel so much better!’

Over a couple of years, a ‘Divine Dunnies’ volunteer committee raised almost $100,000, got the Fraser Coast Regional Council onside and generated support from local businesses, to unveil a masterstroke of public art this week.

Nancy Bates, community champion and former editor of local newspaper the Fraser Coast Chronicle, led the charge. Nancy had visited the previous toilets, saw how unsavoury they were and set the wheels in motion to bring the toilets that she thought were ‘1950’s dowdy’ pirouetting elegantly into the 21st century.

Artists were invited to submit Expressions of Interest with Fraser Coast locals Akos Juhasz and Gary Madden the key artists involved. Akos’ work is well-known in the region with many local murals featuring Akos’s unique style. His work adorns every space bar the floor in the women’s and men’s bathrooms, each with their own distinct themes.

Gary Madden has created a soothing space in the Parents Room with plenty of quirky characters and icons such as Mary Poppins to appeal to youngsters. Piped music themed for each space adds to the sense that this is much more than a regular public toilet. 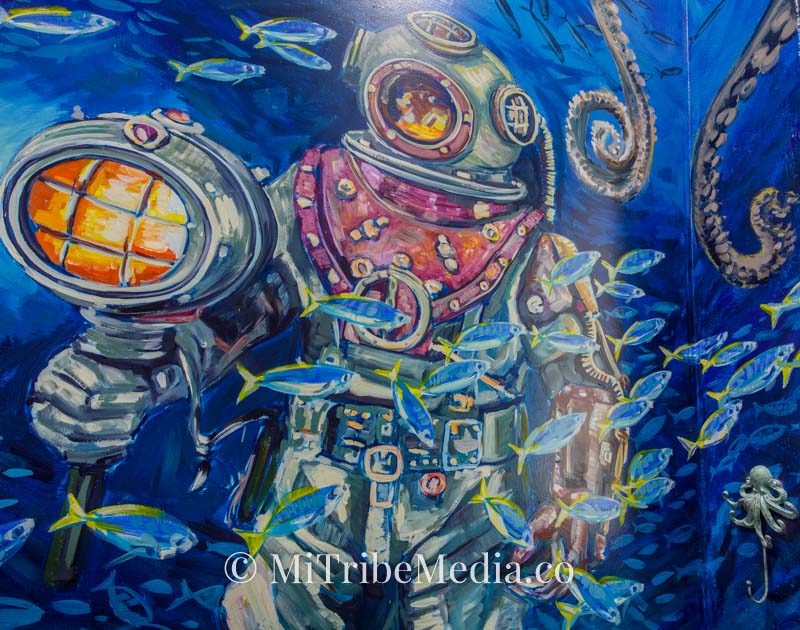 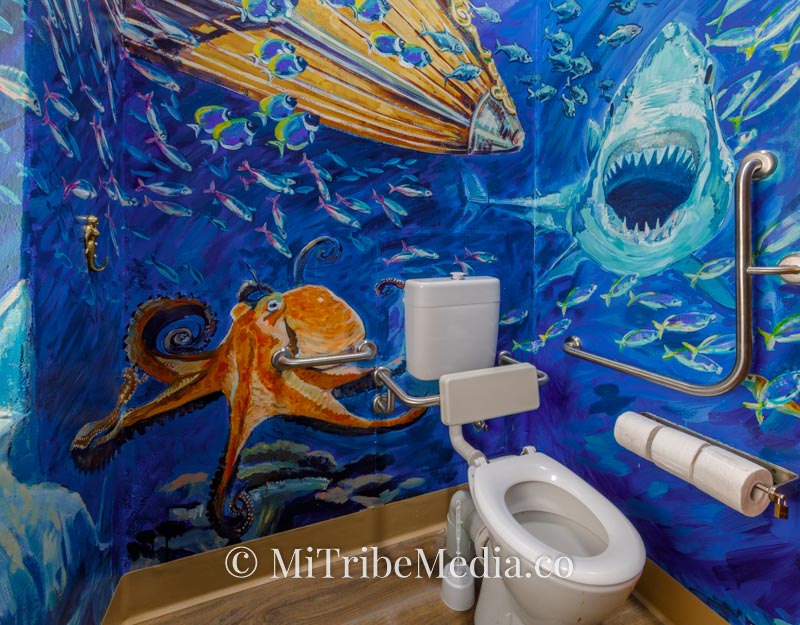 ‘We wanted a Victorian theme throughout, but also wanted to feature the Crimson bottlebrush which is the floral emblem of Maryborough,’ Nancy says.

‘In the female area we wanted something feminine. We have chandeliers, gilded mirrors, and of course, the gold toilet,’ she says, in reference to the throne whose gilded Insta-fame is set to skyrocket once it appears on the radar of road warriors, grey nomads and van-life road trippers.

‘In the men’s area we wanted to focus on trains and steam, which is very much Maryborough’s heritage. It’s all very blokey stuff,’ Nancy says.
Look a little closer and the toilet humour throughout is unmistakable. A larger than life Apollo Belvedere-esque male glides above the men’s urinal, magnifying glass in hand, seemingly suggesting that size matters. Maryborough’s rail history is honoured with Mary Anne, the first steam train to be built in Queensland. On the opposite wall, the former Mayor who literally ‘poo-pooed’ the development of a city-wide sewage system to replace night-carts stares forlornly across a triptych of flashy urinals. The men’s cubicle is themed on Twenty Thousand Leagues Under the Sea and is all sharks, octopus and schooling fish.
‘You’re taking the piss!’ laughs a burly bloke as he walks out the door shaking his head, shoulders heaving with chuckles. 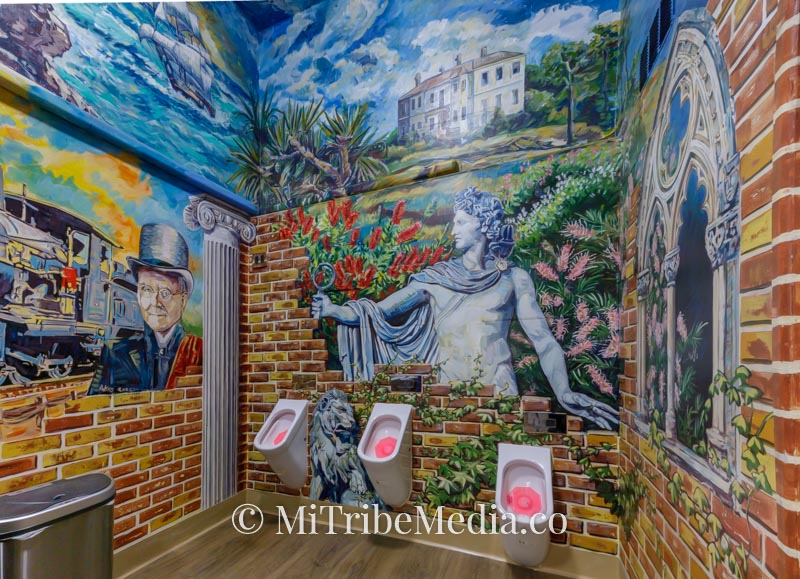 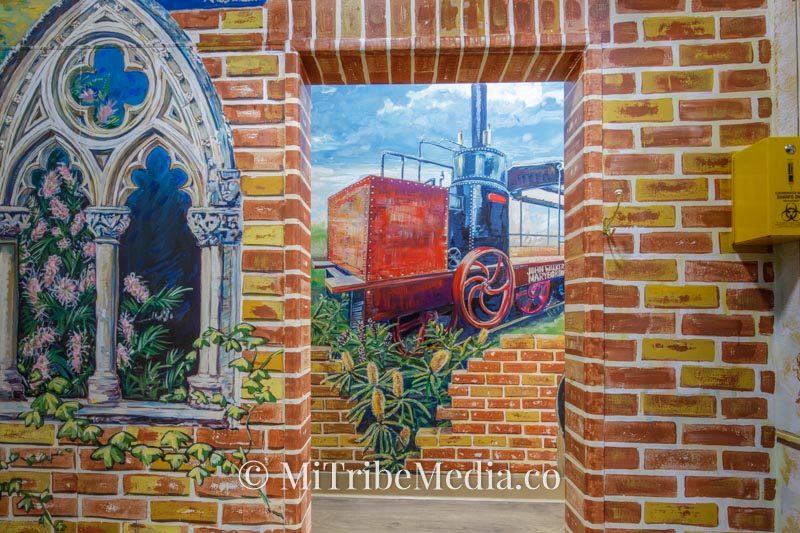 The Ladies ‘chamber’ is a contender for Australia’s most beautiful toilet. Bathed with light from a wall of glass, crystal chandeliers dangle from a vaulted ceiling with delicate clouds. Elegant ladies gaze demurely from blossoming gardens, while one cubicle is gilded with gold walls and has a golden, if somewhat garish, toilet.

In the Parents Room, Mary Poppins, whose character was famously created by Maryborough’s favourite daughter PL Travers, floats skyward beneath an umbrella bathed in light radiating from a hot air balloon suspended from the ceiling. Walls are adorned with rolling meadows, butterflies, frogs and farm animals.

Former radio manager Greig Bolderrow OAM, curated the music piped throughout the building. ‘I’m the bloke who put the music in the shithouses,’ he laughs. Greig’s self-proclaimed ‘weird and twisted sense of humour’ is evident in the music choices.

‘In the men’s urinal we have Handel’s Water Music,’ he chuckles. ‘In the women’s room we have Chamber Music, which I thought appropriate for a bathroom chamber or toilet chamber,’ he laughs again. Birds twitter merrily in the tranquil Parents Room where a lone kookaburra is poised to erupt in cackling laughter.

The Cistern Chapel builds upon the city’s cultural heritage. As one of Queensland’s oldest cities, its history is showcased city-wide in public artworks, world-class museums and galleries. In the 2020 Australian Street Art Awards the Gallipoli to Armistice Memorial won Gold while the Maryborough Mural Trail won Silver in the Best Street Art Trail.

Three days after the Cistern Chapel opened to the public, almost 500 visitors had popped by in just three hours, most to have a look, few to actually relieve themselves.

‘They’re too good to use!’ said one happy camera-toting visitor who had driven fours from Brisbane just to have a look.
Follow the Cistern Chapel on Facebook 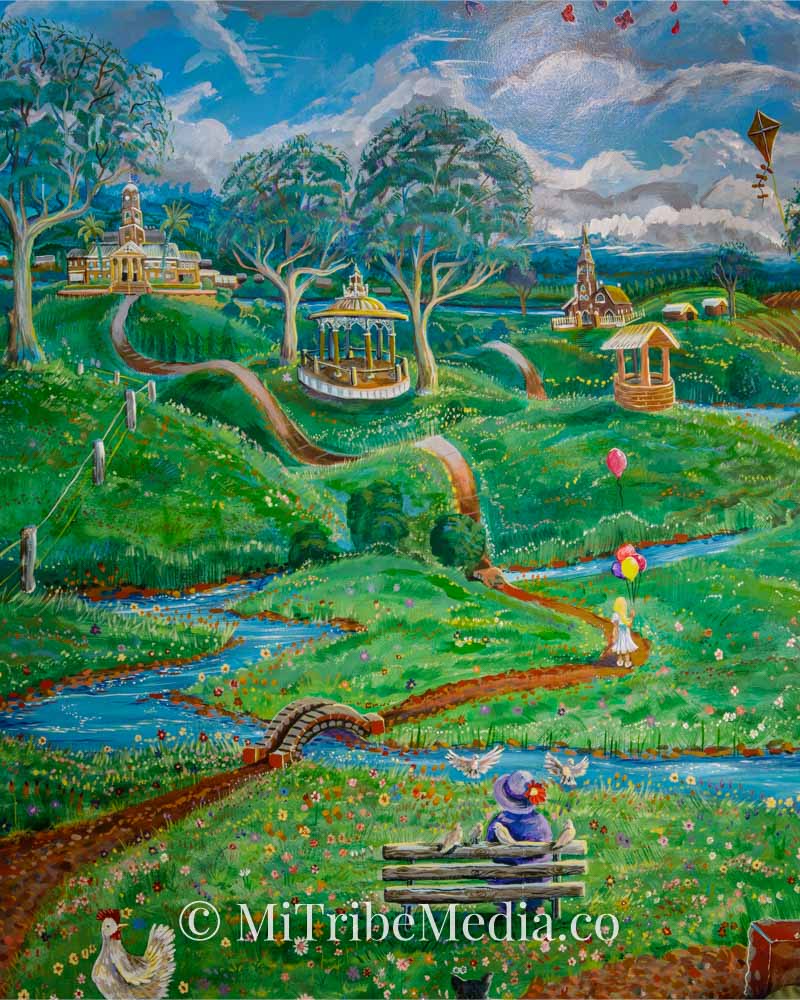 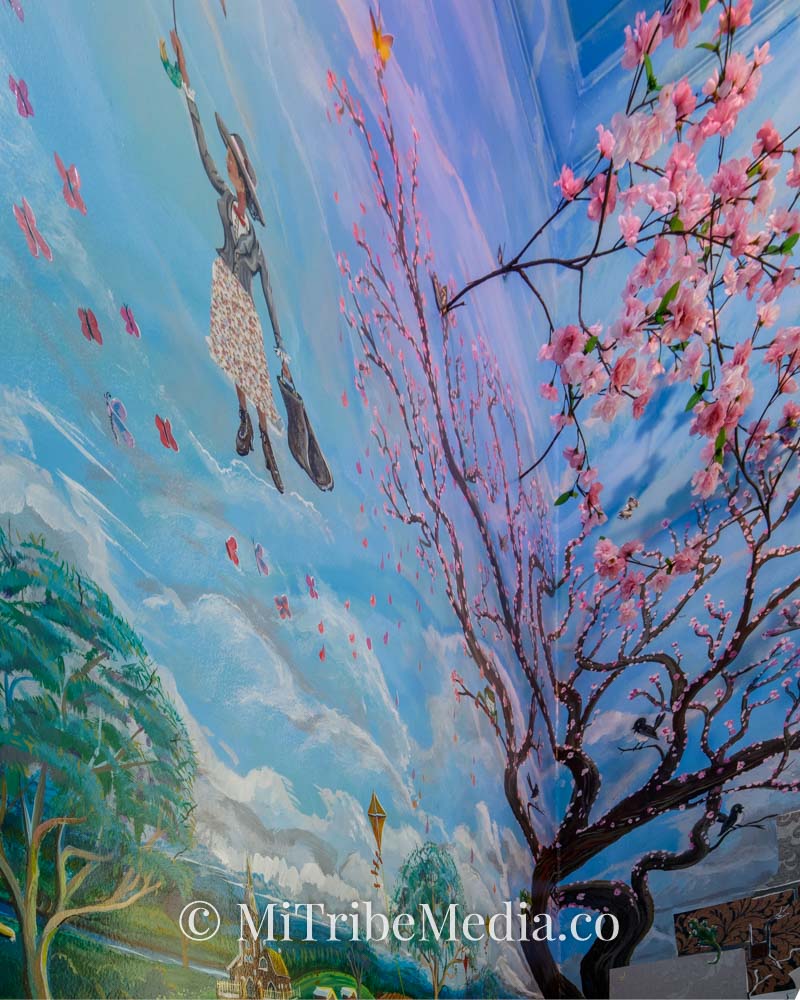 This site uses Akismet to reduce spam. Learn how your comment data is processed.

Enjoying this site? Internet fairy dust will sprinkle upon your karma if you share our site :-)